My life was a mess.

I wasn’t sure who I was, what I was doing, how I was meant to act, respond or behave. That didn’t mean that I couldn’t function or operate on a day to day basis, in fact I was excellent at it.

In my field of employment I reached the highest position in one of the shortest periods of time and at a young age. Brilliant? Hardly, just very good at convincing others that I was in control of things, had the answers and the means to make things happen. I knew I could come across as a confident, well adjusted person.

The trouble was that to give that impression to others took a lot of energy. I constantly felt run down and under pressure to perform and lived with a kind of excitable nervous energy.

Deep down I felt that there was a secret handshake or instruction notice that I had missed out on at birth that held all the answers, and if only I could get a copy I would be all right.

I was a needy friend who looked to others for guidance & perspective. Others could easily sway my opinion of events and circumstances. My confidence & self-esteem were reliant upon others that I believed cared for me & had my best interests at heart. 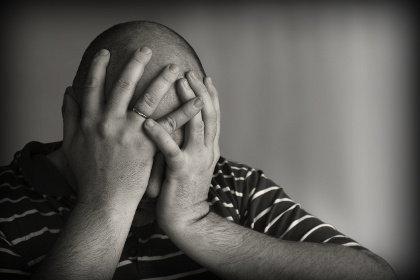 Eric grew up in survival mode and he was stuck in feelings of fear and intimidation, as well as anger

about the way he had been treated as a child.

He recalled that his own father had been very demanding, critical and aggressive throughout his childhood. Rather than praise him for his achievements, his father would point out all his mistakes after he had played a rugby game. Not getting the recognition he so sorely needed as a child, but instead being reprimanded and shamed, left deep scars in his self-confidence.

These feelings were so ingrained and conditioned they were hard to escape from, even though he had excelled in his career and now had a loving wife and two beautiful children. He discovered that he could not provide the leadership as a father and husband for his family. He was deeply disturbed by this. It seemed that his many wins could not make up for the insecurities he felt deep down.

The constant reminder of his unhappy past was that he still could not connect with his mother, father and sister in a healthy, nurturing and supportive way, even now as an adult. His family was stuck in conflict mode and there was no relief and no chance of healing for him.

Although he realized that he needed to be more confident and self assured, he was finding it close to impossible to think his way out of his uncertainty about himself. The reason was that his nervous system was stuck in a defensive mode. As a child he felt psychologically and physically attacked on a regular basis. Instead of developing the belief that he could solve problems successfully, he developed self doubt. He was permanently trapped in a reflex survival state of fear.

To understand Eric’s condition we need to understand how our survival reflexes work. We already have survival instincts from a few weeks after conception. Even when we are a tiny fetus in the womb our nervous system is already preparing us to recognize danger and to respond to it.

Every time we feel threatened in any way, either physically or psychologically, these survival reflexes kick in. Our three primary survival reflexes, are fight, fight and freeze: We either fight to survive, we flee in fear if the threat is too great, or we give up and freeze. The freeze response is for when neither fight nor flight will solve the problem. This response is reserved for life threatening situations and is a typical reaction to shock and traumatic experiences.

Our mother plays a very important role in helping us learn to control our fears, our disappointments and frustrations. A loving mother reads her baby’s signals of distress and calms the baby down. This calming down and the excitement and joy of playful affection help us to learn to regulate our emotions, especially our survival emotions of anger, fear and apathy. In technical terms, this is called good affect regulation or emotion regulation.

If for any reason we did not get this nurturing and re-assurance in infancy and childhood, we can remain stuck in too much anxiety for the rest of our adult life. Once we are stuck in an anxious state no amount of self soothing will work. For example, you meditate, or take time out, but your anxiety is still here. Traumas and very stressful experiences can also lock us into chronic anxiety.

Eric was stuck flight and freeze because he had been repeatedly attacked psychologically and also physically, in a situation where there was no escape. Eric’s stressful experiences in childhood activated and locked in his amygdala, a small part of the brain that produces the reflex defenses of fight, flight and freeze. To assist Eric this survival reflex part of his brain needed to be calmed down.

We used Body Mind Fractal exercises to calm down the instinct-oriented part of Eric’s brain called the amygdala. After his sessions he was more able to use the conscious, decision making part of his brain called the hippocampus.

He was asked to do specific physical exercises to activate his body memories and conditioned physical reactions. At the same time he was instructed to contemplate his most troublesome emotions to bring them to the surface in order to be released.

Using Body Mind Fractals helped Eric’s brain to finally let go of the emotional pain of disappointment and hurt feelings. The self-doubt that still remained trapped in his nervous system from when he was a young boy simply dropped away. Body Mind Fractals cleared up the stress from his childhood and then matured his emotions to an adult level.

Eric’s problem was that he had not developed a clear sense of identity in himself, he was uncertain about who he was and how he was to act.

Eric examined his beliefs about himself, his wishes and dreams and his highest aspirations He decided that being a good father to his children and a good husband to his wife was his highest value.

He was ambitious and determined to overcome his negative and destructive family patterns. He did not want this legacy passed onto his children. When Eric’s young son said to him, ‘Dad, I love you so much, you are my hero.’, he knew he had made the beginnings of a new life.

This is how he describes his transformation:

‘I don’t suffer guilt. I don’t beat up on myself now, preferring kindness to criticism. This is a change I don’t think I ever thought I could make. I was so good at self-criticism and punishment, that I quite enjoyed it. Failure was part of my everyday vocabulary and even when things were good, I would expect it to deteriorate.

I have found myself feeling empathy for others without taking on their pain and responsibilities. I act as an adult now taking account for my life and all aspects of it and affording those around me the same opportunities.

I no longer feel guilt and grief about the past. I prefer to focus on the future. The past does not have the same hold over me. I am able to see others in my life very differently now. I am prepared to listen more and act on their behalf less. I feel a sense of honesty about my behaviour. I am reliable and concerned about others but not always at the expense of my own needs.

I don’t blame others for my lot in life. I consider myself fortunate now seeing many more positives.

I am more productive. I see projects through to their completion and have developed a preparedness to strive for more than I thought I was capable of. I am enthusiastic about the changes I am experiencing and feel a very real sense of anything is possible.

I don’t dwell on choices and decisions I need to make, regardless if they are large or small. There is a determination about me now that is courageous and motivated. There is a level of optimism about the future that I have never experienced before.

I am becoming more in tune with my needs. I take time out for myself now. I am able to recognise when I am stressed and act immediately to reduce the impact and consequences. I feel I am a more complete human being, able to deal with a wider range of circumstances without feeling overwhelmed.

I find more joy in my day. I am able to laugh more and enjoy other people’s company. I am more interested in the stories of others. I listen and take information in. I am more considerate of others and their feelings.

Our family and the relationships within are becoming so strong. Once I complete the therapy, I will have broken a dysfunctional chain of events and family history forever. I believe that this is the greatest gift I could ever leave my children and their families.

My Passion for Life is Gone